Tracks Unlimited, LLC is a full service railroad contracting company with over 25 years of experience designing, building, maintaining and repairing railroads throughout New Jersey, the Northeast and the Mid-Atlantic region.

With more than 40 years in the construction industry, Gerard’s steadfast work ethic continues to drive him forward as both President of Union Paving & Construction, Co., and a Managing Member of Tracks Unlimited, LLC.   Gerard has also served on the Board of Directors of the Utility and Transportation Contractors Association of New Jersey since 1996 and as a Trustee for the Construction Industry Advancement Program of New Jersey from 2004-2013.

Building on their success as Heavy Highway Contractors, Gerard and his brother Nicholas entered the railroad construction and maintenance industry in 2015. They have applied the same level of expertise and commitment to excellence to their work in the railroad industry and have seen remarkable success. All facets of the operations of Union Paving & Construction, Co. and Tracks Unlimited, LLC are overseen by the two brothers. 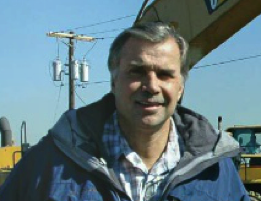 With more than 45 years of experience and service in the construction industry, Nicholas is adept in all facets of Heavy Highway and Railroad Construction. When working on projects where staging, heavy construction and utility operations are complex, his experience is unmatched.

With his extensive knowledge of pre-construction planning, construction components, and scheduling manpower and equipment, Nicholas offers guidance to multiple project teams at Tracks Unlimited, LLC. He has instilled his discipline, integrity, and perseverance to all of the project personnel — from our tradesmen to the foremen, to the superintendents and the project management staff.

Andy began working in construction at the age of 16. He spent his summers in high school and college working as a laborer on paving and site work projects. Andy graduated from Roger Williams University in Rhode Island with a Bachelor’s degree in Construction Management. Subsequent to graduation, Andy moved to Colorado where he worked for Flatiron Constructors while attending graduate school at Colorado State University. In 2005 he earned his Master’s degree in Construction Management.

Andy began working at Union Paving in 2006. He was the project manager on many prominent projects including the Rt. 1&9 Section 1K and 3M, as well as the Rt. 7 WittPenn Bridge. Andy transitioned into the role of Chief Operating Officer for Tracks Unlimited in December of 2015.

Len has almost 40 years of construction, managerial and engineering experience in the transportation and heavy construction industry. After starting his career as a structural design engineer for marine and petro-chemical facilities, he shifted to the construction side of the table where he has remained.

In 2014 Frank graduated from the New Jersey Institute of Technology in New Jersey with a Bachelor’s degree in civil engineering. Subsequent to gradation, Frank began working for Conti Enterprises as a Field Engineer for landfill capping project and transitioned to Assistant superintendent for a bridge rehabilitation project.

Frank began working at Tracks Unlimited in 2016. He was the project superintendent on many projects including the 2018 and 2019 Conrail 2019 NJDOT Grade Crossing Projects, LIRR Jamaica Capacity Improvements Phase 1, Stavola Quarry unloading and loading tracks in Bound Brook and Conrail Millstone Industrial Track Project. He has also worked on the design of the Stavola loading and unloading tracks in Bound Brook and the Yard 4 storage tracks in IMTT.

Nick graduated New Jersey Institute of Technology with a bachelor’s degree in Construction Management Technology and a minor in business. While attending NJIT, Nick worked for Union Paving & Construction as an intern. Nick became a project engineer at Union Paving after graduation and worked on heavy highway/civil projects for the New Jersey Turnpike Authority, NJDOT and Port Authority.

In 2018, Nick transitioned to Tracks Unlimited LLC as a project manager. He is responsible for a range of public and private projects from coordinating emergency derailment repairs to long-term infrastructure improvements. His projects involve work on both freight and commuter transit lines. Currently Nick is involved in several projects for private industries, NJ Transit and New York City Transit throughout the tristate area.